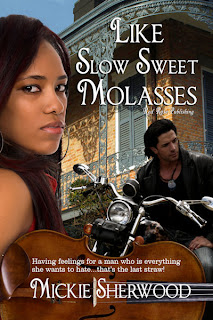 Blurb:
Teacher Angela Munso has lost control—of her spiraling life. She can control the fallout of recent news from whose loins she sprang as easily as she can her heart’s pitter-patter. To have feelings for a man who is everything she now wants to hate? That’s the last straw!
Lt. Brock "Chance" Alexander’s arrogance baits Angela. And—he knows it. It’s never so obvious to him as when she lobs that insulting phrase at the side of his head. She pushes all of his hot buttons. But, there’s one he dares her to touch—the one that pushes him out of her life.

Excerpt:
Angela enjoyed the refreshing taste of her favorite cherry flavored ICEE on the walk home from the corner store several blocks away. Secretly keeping tabs on Chance’s motorcycle, relief flooded her being when she peeked and it no longer took up space at the curb. The absence was enough incentive for her to treat herself and get out of the house for a walk to boot mainly in an effort not to dwell on the difficulty encountered when practicing her viola.
Her thong sandals gritted on the sandy concrete broadcasting her position to all within hearing distance. The empty street was hers alone. The sky shed its grayness as daylight waned; coloring the atmospheric canvas a sea-blue sprinkled with floating cotton, sun-kissed and striped a feathery red. Marveling at the beauty, she sipped her drink, taking her sweet time in climbing the stone steps to her yard.
“How are you this evening, Angela?” Mrs. Thatcher called. She and Chance sat comfortably in the swing, keeping a constant back and forth motion, satiated after their light supper.
Initially unaware of their presence, she was startled to learn of her mistake. She wasn’t alone after all. “Fine, thank you, Mrs. Thatcher,” she lied. “And you?”
“Muddling along for an old lady.” Chastising her relative, “Don’t be so impolite, Brock. Speak.”
“Miss Munso.” His mind drifted to the music he heard coming from her upstairs window, a hauntingly melodious tune she had difficulty completing—pausing at the same spot after each try. Not to be outdone, he assumed, she finished the song by singing the notes in melodic crystal clarity.
“Lt. Alexander.” Angela decided to make her exit calling over her shoulder as she advanced on the door. “See you later, Mrs.—” The remaining words dwindled to a gurgle and the cup fell in slow motion from her hand. A smoky cheroot scent assailed her olfactory senses in competition with her sense of hearing just as one foot crossed the threshold. Alarm painted her features as she spun to look dead at Chance, eyes silently screaming for help.
The fine hairs on his arms snapped to attention across the distance launching his ascent from the swing like a rocket booster, landing him beside her in a flash. “What is it?” He heard it, too, while she backed away. Someone moved inside her home. “Were you expecting company?”
All she managed was a negative headshake.
The exchange of places allowed him to feel the delicate bones in her soft hands. “Stay out here. I’ll come for you once I’ve cleared the house.” She looked panicked. “Understood?”
She silently nodded her assent.
She watched him cautiously enter on cat’s feet, his expertise in such matters clearly exhibited. Now and again, she caught a hint of his movement as he materialized from one room to disappear into the next. How fickle could she be to put his life in jeopardy when she scorned him previously? Angela’s conscience whipped up on her. So much so that she tiptoed up the stairs behind him, against his express wishes.
The bottom floor proved empty sending him up to the next level, senses attuned and gun drawn. He whirled after hearing the slightest movement, leveling the weapon stiff armed and double-fisted. She gasped. Chance rapidly raised the barrel to the ceiling. He noted how in her flustered state she crashed backwards, bumping her head on the descent.
“Ow-w-w,” she groaned, vaguely aware of the swaying meadow grasses enveloping her before the light receded and he completely disappeared.
“Cra-ap!” That was as close to an expletive Chance could come to since turning over his new leaf. He knew the culprit had escaped through the door to the rear of the house for it was wide open. Yet, it was a precautionary measure to do a check of the upstairs, just in case. “Angela? Can you hear me?” Thumbing the safety and holstering his gun, Chance huddled over her on all fours.

How emboldened would you be to a man with a badge...and a gun?

Thanks, Lindsay, for allowing me to share with your visitors.

Tweeted this for you, Mickie! I wish you many sales!