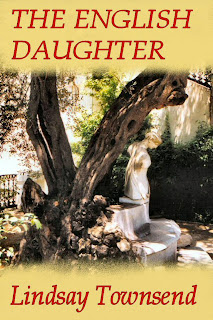 They returned to an arcaded street where they could stroll side by side, and Harry released Val’s fingers. Perversely, Val was disappointed.

‘Wait, please.’ Harry crouched in the middle of the alley to retie one shoelace. Steve and Judith pushed round them. Judith, counting caged birds, called, ‘There’s another!’

Staring down at Harry, Val wondered if he was trying to put her off balance. Even as she thought it, he glanced up, straight at her. ‘How about that visit to your workshop right now?’

‘No cemetery?’ Val teased back.

Harry laughed, but said, ‘Or you go on alone there, if you want. Time in your own place.’ He rose, looking her up and down, his face hardening. ‘You’ve had enough today.’

Did she trust Harry? Could she really rely on him?

‘Val.’ Harry’s voice returned Val to the middle of the alley. ‘What do you say? A simple yes will do.’

Since when did he become so bossy? Val marvelled, uncertain what to make of this new Harry. She opened her mouth but was forestalled by Judith. Her daughter ran back up the street and cannoned into her legs.

‘There’s a poster round the corner of Beauty and the Beast! Can we go, Mummy, please?’

Val drew Judy out of the road and knelt in front of her daughter. Had she and Judith been alone, she would have happily gone to see her child’s favourite film, but asking Steve or Harry to do so was unfair.

‘Judy, I don’t think—’ she began, when Steve touched her arm.

‘It’s no problem,’ he said, quietly. ‘There’s a film starting in about twenty minutes. Won’t do me any harm.’

Harry took out his wallet and thrust a wad of euros at Steve. ‘Have an ice-cream while you’re about it,’ he remarked, nodding at Judy.

Val admitted it made sense. Her workshop really wasn’t the place for Judy and they all needed a lift after that family reunion.

‘Right, but come straight back to the workshop as soon as the film’s over. You’re clear about the address? And you know where you’re going?

‘You put Steve up to that,’ she said, waving them off, watching until they had turned the corner.

‘Did I?’ Harry was looking past her, right over her head.

‘What?’ Val turned, her eye drawn to a poster celebrating the return of the ‘International Performer’ Stefan Gregory to Corfu. Hear him live at the Achillion! the poster proclaimed, a horrible irony. ‘I need a newspaper, Harry.’

‘There’s a little shop three doors down. I’m sure they’ll sell them.’ Harry stepped round Val and was off. ‘You’ll translate the crime reports?’ he called back. ‘I still don’t read Greek so well.’

Val trotted to catch up. ‘Why do you want to know?’

Harry swung round. ‘No, Val. The question is, why do you?’

‘Why are you still thinking like a policeman? You’re as bad—’ Val stopped the rest of the complaint. She didn’t want her father or Markos shadowing them, least of all Markos.

As bad as Nick, finished Harry in his own mind. Maybe he should go after Judy and Steve. The rest of this evening was going to be a bust.

‘This is it.’ Val set her shoulder to the workshop door.

‘You like it?’ Val was surprised. Most visitors to Nonno’s workshop were overwhelmed. Nick had said, ‘How do you move in here?’ but Harry entered the room as she did, with a quiet confidence.

They breathed in together, sharing the scents of resin, polish and wood. His eyes were everywhere, taking in the dismantled pianos, lighting on the old hard swatches of felt, sweeping to the stone sink in the corner and up the walls with their shelves and tools. He turned about in a circle.

‘Whenever I picture you at work, I’ll always see you here.’

Val nodded, swallowing. She was foolishly touched by Harry’s sensitivity and ashamed of her earlier churlishness. ‘I’m sorry.’

‘Don’t apologize. You say sorry far too much.’

She walked over to him. ‘Bend down - you’ve got a cobweb.’

Harry half crouched and she lifted spider and web off the bronzing temple close to his left ear, marvelling at the Viking hair, the thick golden brows and eyelashes, pitying his slightly receding hairline. She dangled the spider on the closed shutters, startled by her own disappointment that Harry had made no attempt to touch her in return.

The heat’s getting to me, she thought, turning from the shutters straight into Harry’s arms.

‘Hello back.’ Aware that the next move must come from her, she transferred the local newspaper from her left hand into both hands, gripping it in front of her, and rested her head against his breastbone.

There was no sense of wonder, or fireworks, as there had been with Nick. Val was oddly divorced from her senses. She didn’t want more than this floating peace. ‘I can’t—’

‘Sssh. It’s all right.’ He brushed her jaw with his fingers, seeking her chin to raise her head. ‘I only want to look at you.’

‘You’ve seen me lots of times,’ Val muttered at his stomach.

‘We’re not in Fenfield,’ she agreed, and lifted her face to his.

In the distance there was a knocking. Val didn’t connect it with the workshop until Harry placed a warning finger on her lips.

‘Let me in!’ Markos hammered on her door. As Val tensed, he kicked the solid black wood of the outer door and left without noticing that it was unlocked.

‘That was lucky,’ Val said, as his pounding feet faded away.

Harry spread a hand across the middle of her back and teased her closer. ‘You’ve already told me about Markos, but am I missing something?’

Val batted him with the paper. ‘Stop being a copper. It’s not important.’

‘Fair enough, Val.’ He released her and strode to the window, strumming his left hand down the length of one shutter. ‘What about that newspaper report you wanted to see?’

Sensing that even this activity would be the prelude to more questions, Val spread the paper on the bench. Harry came to stare over her shoulder.

‘Well?’ he prompted above her, leaning on his braced arm, his palm spread on the bench amongst a tiny, forgotten pile of old wood shavings.

‘It says very little.’ Even as she scanned the pages covering the latest murder, she wondered just how much her companion understood. Not only about the body found at the Achillion.

‘A young woman’s naked body, discovered amongst trees in the grounds of the Achillion,’ she paraphrased. ‘No one seems to know who she is, what nationality. It says she died of a broken neck.’

‘Her killer must be physically strong, then,’ said Harry.

Val’s fingers traced the lines. ‘The paper speaks of other wounds that the police won’t disclose. It doesn’t say she was raped, but people are already talking about the Achillion killer striking again.’

‘How many times has this happened? Bodies of naked young women found in a well-known beauty spot?’

‘I wouldn’t call the Achillion beautiful.’

‘Tourist spot. Whatever. What’s going on, Val? When Markos trumpeted his news, you went white.’

Why did she feel tempted to confess? ‘It was years ago,’ she said, covering her confusion by folding up the newspaper. ‘An English tourist called Hilary Moffat was killed here. She vanished from Corfu town and was found raped and murdered in the grounds of the Achillion the following night.’

‘What distances are we talking here? Between Corfu town and the Achillion?’

‘So it’s likely the killer had some kind of transport. And possibly an appealing manner, to lure the girl into it?’

‘I should think so.’ Val had considered these points long ago. ‘It would be hard to snatch someone off the streets: too many people would see.’

‘Were there any suspects the first time?’

Val shook her head. ‘I don’t know. The newspapers never mentioned anyone. No one was charged.’

‘And the first victim was also naked?’

Val nodded, blushing as Harry looked at her, his head tilted to one side so that he could see all her face.

‘She was a music student like me, that’s all.’

She expected more - what, she couldn’t say. More questions, possibly. Instead, Harry’s face closed down as she spoke.

‘I see.’ He returned to his vantage point beside the shutters.

‘What? What do you see?’ Val became more exasperated as Harry smiled  and not a pleasant smile.

‘Not comfortable, is it, being shut out?’

Harry wandered back to her, reached under the bench and lifted out her tall stool. ‘Why don’t we start again? You sit here and explain as much as you feel easy to tell me.’

Val sat on the stool and glanced at her watch.

‘We’ve plenty of time. The film won’t have started yet,’ Harry coaxed.

‘I know.’ Anxious about confessing her involvement with Hilary, Val chewed on her lower lip.

Harry crossed the stone flags yet again and peered through the gap in the shutters. ‘Nothing you say will change my good opinion of you— Hello! There’s someone outside. He’s coming here.’

A brisk rattling at the inner door.
Posted by Lindsay Townsend at 18:55 No comments: