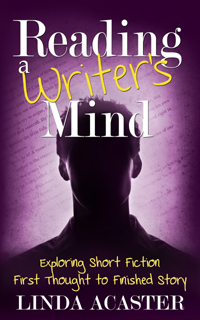 “To write fiction, read fiction to understand how it is written.”

This advice, often given baldly to new writers as if it were the secret to the universe, fails at its first step. Fiction is designed to elicit a reader’s reaction, not to fall into its constituent parts as soon as it is embraced. There needs to be some sort of guide. It’s one thing knowing that such ethereal elements as Tone and Atmosphere exist, but can either be easily recognised? If so, is it obvious how and why they were applied?

In Reading a Writer’s Mind: Exploring Short Fiction – First Thought To Finished Story it is this in-depth examination of ten short stories that causes to stand out among the plethora of available writers’ guides. It doesn’t deal in generalities, but in specifics.

Each story, taken from a major genre, is introduced via the trigger/s for its existence, and then the story as it was originally printed. A detailed commentary follows discussing the decisions made during the creative process. Readers tell me they find it beneficial to re-read the story in the light of the commentary. “…once explained, it’s simple!” Well, not too simple, as they tend to discover when following the exercises intended to put the discussed techniques into practice.

Read an excerpt from a commentary

It is true, though, that once guided the beginner can start to see the individual elements which make up other fiction. It’s a case of turning the reader’s eye into a writer’s eye, and that’s what the book sets out to do.

The book is available in both paperback and ebook, and the sections covered include:
•    Lyrical narrative v terse dialogue (Mainstream)
•    Characterisation through deed and thought (Horror)
•    A calendar structure using the Tell technique (Women's Fiction)
•    The importance of pacing (Twist in the Tale)
•    The use of alliteration, rhythm and subliminal detailing (Romance)
•    Using the Show technique to elicit a reader response (Drama)
•    Building fiction with an unsympathetic narrator (Crime)
•    Working with parallel storylines via past and present tense (SF)
•    Conjuring the weird from the everyday (Fantasy)
•    Writing for performance and sound effects (Historical)
•    Editing: ten common problems explored.


Linda Acaster is the author of five novels, over 70 short stories, and a mass of articles covering the techniques used in writing fiction. Connect to her:
http://www.lindaacaster.com/
https://www.facebook.com/lindaacasterUK
https://twitter.com/LindaAcaster
Posted by Linda Acaster at 06:16 3 comments: