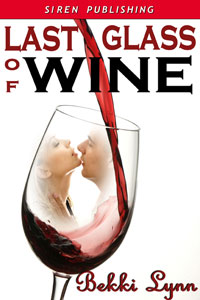 She reached up to fuss, and the stretch tightened her slacks, pronouncing the path to the place he wanted to thrust his hard cock into. She came down a step, and his eyes met hers in the mirror. For a few seconds she didn’t move and he didn’t speak. He realized it was the first time they’d seen one another since he’d followed her home. His eyebrows rose. He wondered if she was still pissed at him.

Lana stepped down onto the floor and came toward him. “Thank you.” She took the box from him and opened it.

He remained near the door, not trusting himself to be near her. It would be so easy to pull the door shut and ravish her. But he couldn’t. He’d be gone in ten days and didn’t want to deal with the attitude she’d give him.

“Is there anything else you need?” The lid on the box stopped in mid-removal as her eyes closed. “Lana.”
She set the lid aside and stared down at the carnations as she spoke to him. “I need the box of mini vases from the office.”

“What about the buffet table? Do you want it set up now or when you come back?”

“It can wait until I return. I want time to shower and change into a cocktail outfit.”

The look of regret on her face said she didn’t meant to give him the image of her naked, wet and hot, but he didn’t need help. He shoved his hands in his pockets. “Tell me what you need done, and I’ll see it’s done. It’ll give you plenty of time to…a… get ready.”

“No, this is something I need to do myself.” She faced him with a red carnation in her hand. He’d always wondered what she’d look like in red. It was beautiful against her fair skin.

“I’ve known the Switzers all my life and have been doing their reunions since I turned twenty-one.”

Her voice softened, as it always did when she felt comfortable with a topic. To him, it only drew him closer. She lifted her face when he stopped in front of her.

“Lana, you’re rambling,” he whispered. Her eyes moved over his, and he balled his hands up. “There are reasons we can’t fool around.”

Before he consciously thought of the movement, he reached out and ran his finger along her jaw line and over her lips. “No. Yes, I’ll get them, but I don’t want you to get hurt—and you will.”

“I would have thought with two days off, you would have completely forgotten…what I’d said…did.” She turned away from him and laid the flower down on the table.

Forgotten how she felt in his arms—not hardly. “I’ll be back with the vases.”

It’d only taken a few minutes to walk back to get the box. When he returned to the banquet room, her ass stuck in the air as she bent to retrieve some greenery from the floor. “Damn it, Lana!”

The covers featured here are from the authors on the Contemporary Fiction Network Blog.
Happy Christmas! Happy Reading!

From the authors of the Contemporary Fiction Network.

If you enjoy reading contemporary fiction and you are looking for some Christmas reading, take a look in the comments section of this blog post.

Contemporary authors - please feel free to post in the comments section of this blog post. Please add the following - title, author and brief blurb of any historical fiction, plus a single buy link, such as your web page. If any of your titles are under offers, please say so. Contributing to anthologies is both exciting and nerve-racking, since you have absolutely no idea who the other authors will be until the finished product appears. To my great relief, I have enjoyed the other stories in the anthologies to which I have contributed so far and found the other authors to be highly entertaining and full of enthusiasm for promoting the books.

The Spellbound lot are great fun and I have made some real friends amongst them.

The quality of writing is exceptionally high and one of the stories, Room 1309.5 by John Mecom, received honorable mention in the Fifth Annual Writer's Digest Popular Fiction Awards.

I must say I feel really proud to be in such company.

In my opinion, there isn't a single dud in the whole anthology.

I hope you agree.

Here is the blurb:

Spellbound at Midnight by Isabelle Kane & Audrey Tremaine
In the sultry Big Easy, Viole Godin is hired to restore Magnolia Place, an antebellum mansion which is crumbling under a mysterious curse. Marie Verret and her dangerously attractive grandson, Lucien, believe Viole is the key to ending the curse one magical Halloween night.

Room 1309.5 by John M. Mecom
Inspired by the works of Poe and Stephen King, Room 1309.5 is a story of revenge and despair. It is the author's first story to be published and received honorable mention in the Fifth Annual Writer's Digest Popular Fiction Awards.

Mansion of Nightmares by Walt Trizna
A mysterious mansion, long abandoned, harbors a past that claims those who enter. Then one day, by a stroke of luck, an intruder survives and uncovers its secret.

Ghost Taxi by Joanna Foreman
A man drowns heading for freedom in America, but his ghost is trapped. Washed up on the beach, the ghost is an illegal alien, not allowed to cross the street into Miami. A homeless man and a vacationing tourist search for his wife so the ghost can possess her.

Uncle Vernon by Jenny Twist
There's something very peculiar about Uncle Vernon. Nobody knows what he does in the cellar. But he's quite harmless, really. Isn't he?

Half Seen, Half Hidden by John Steiner
Nine dead. One missing. No suspects and no leads. What happened in the cabin outside Wilson Wyoming? Where and who is Mason Oliver? Deep within ourselves rests a greater mystery. Half Seen, Half Hidden traces the last three days of Mason Oliver and nine hitchhikers. Offering them shelter, Mason takes them to a secluded cabin. There they all sense the others aren't quite the strangers they seemed, and that they hold something extraordinary in common.

Telltale Signs by Tori L Ridgewood
Don't stay in the Dark Lake Museum after sunset! But Kate Elliot has a deadline to meet. Working overtime, she realizes she's not alone in the creepy old mansion...

The Origin of Fear by Tara Fox Hall
Four college friends mount an expedition to Latham's Landing-an abandoned island estate infamous for mysterious deaths-to gather pictures and inspiration for a thesis on the origin of fear.

And here is an excerpt from my own contribution.

She reached the ground floor without further incident and was just reaching for the handle on the back door, when she realised there was someone in the kitchen. She could hear singing – Janice, singing along with the radio. Damn! She didn’t think she could let herself out the back way without being seen from the kitchen window. She was still trying to work out a way round this when suddenly she felt a hand on her shoulder and she gave a small shriek of surprise and turned round.

Standing in the passage was an enormously tall, incredibly thin man. His face was so pale it was almost translucent. His hair was completely white and swept back from his forehead in a perfect Dracula’s widow’s peak He was dressed entirely in black, the collar of his coat turned up like Dracula’s cloak. And his eyes were staring and colourless in the dim light of the passage.

She screamed a full-blooded, heroine in a horror film scream. And the man put up his hands as if to fend her off. Long, thin, incredibly white hands with long, thin fingers.

She screamed again and was just taking a breath to scream a third time, when the kitchen door opened and Janice said, “It’s all right. It’s only Uncle Vernon.”

Alison flung herself, sobbing, into Janice’s arms and looked back into the passage way. The man had disappeared! How? There was nowhere for him to go. At that moment Gary came clattering down the stairs.

For more excerpts and other stuff, go to my website.

Thank you so much for sharing my visit and thank you, Contemporary Fiction, for giving me the opportunity. I really appreciate it.