Fragrance of Violets by Paula Martin

My new contemporary romance, 'Fragrance of Violets’, is released today by Whiskey Creek Press as both e-book and paperback  http://bit.ly/AnU6qV  It will also be on Amazon and Fictionwise shortly. 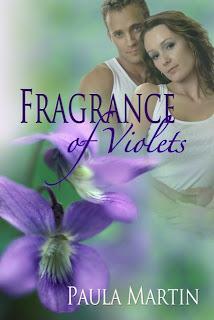 The title comes from a quote by Mark Twain: Forgiveness is the fragrance that the violet sheds on the heel that has crushed it.
The story, set mainly in England’s beautiful Lake District, is about two people who need to forgive each other and also deal with other issues in their lives.


Abbey Seton distrusts men, especially Jack Tremayne who destroyed their friendship when they were teenagers. Ten years later, they meet again. Can they put the past behind them?


Abbey has to forgive not only Jack, but also her father who deserted his family when she was young. Jack holds himself responsible for his fiancée’s death. He’s also hiding another secret which threatens the fragile resumption of his relationship with Abbey.


Will Abbey ever forgive him when she finds out the truth?
You can read the first chapter on the Whiskey Creek Press website, but here's an excerpt which hopefully will tempt you!

Abbey swung her car into the car park and pulled up beside the shop. After she’d unlocked the side door and switched on the light, she returned to the car and opened the boot.
She’d just lifted out the first box when a voice startled her.
“Want some help with that?”
She spun round in the direction of the voice. It was dark but she didn’t need to see him. Her mouth went dry and her hands tightened on the box.
“No, thanks, I can manage.”
Jack Tremayne stepped into the dim light cast by one of the car park lamps. As her eyes adjusted, Abbey caught her breath. His dark sweatshirt stretched across wide shoulders and broad chest, and mid-blue jeans encased his slim hips and long legs. No longer a teenage boy, but a man whose compelling figure exuded confident masculinity. Something deep inside her turned a double somersault.
“What the hell are you doing here?” Resentment at her involuntary reaction to him lent an extra sharp tone to her voice.
“Welcome to Rusthwaite,” he said with amused irony.
“You aren’t welcome here,” she retorted. “Not by me, not by anyone.”
He shrugged. “Maybe not, but I’m back, and I intend to stay.”
Shock ran through her like a cold shower. “You’re staying?”
“Why not? It’s my home.”
“The home you betrayed,” she said bitterly.
“That was eight years ago. People forget.”
As he took a few steps towards her car, the light spilling from the shop doorway illuminated his face. His blond hair seemed to have darkened to the colour of light sand and was brushed back instead of the tousled look she remembered. But several stray strands escaped over his broad forehead, and her glance took in his handsome features – the blue eyes, the high cheekbones, the well-defined jaw, the perfectly shaped mouth and the cleft above his chin.
A quiver rippled through her but she ignored it. “No, Jack,” she said, as calmly as she could. “This village hasn’t forgotten. People here won’t ever forgive you.”
“What about you?” His eyes challenged her, forced her to remember the night everything had gone wrong between them.
She returned his look with a defiant glare and tried to distance herself from the unwanted sensations inside her that threatened to destroy her composure. “I don’t think you and I have anything further to say to each other. So if you’ll excuse me, I need to unload this shop stock.”
“Are you sure I can’t help?”
“Absolutely sure.”
“Okay,” he said briefly as she turned away and took the box into the shop.
When she returned to the car, he’d gone. She stared through the darkness towards the main road, but he’d obviously walked quickly. There was no-one there.
She made herself concentrate on carrying the boxes into the storeroom and stacking them tidily, ready to be unpacked the next morning. But as she put down the last box, she realised she was shaking.
Meeting Jack Tremayne again had catapulted all her feelings into total disarray.
Posted by Paula Martin at 21:06 2 comments: