The Artisan Heart by Dean Mayes. A story of love and betrayal in contemporary Australia 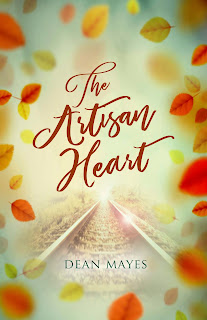 "Hayden Luschcombe is a brilliant paediatrician living in Adelaide with his wife Bernadette, an ambitious event planner. His life consists of soul-wrenching days at the hospital and tedious evenings attending the lavish parties organised by Bernadette.

When an act of betrayal coincides with a traumatic confrontation, Hayden flees Adelaide, his life in ruins. His destination is Walhalla, nestled in Australia’s southern mountains, where he finds his childhood home falling apart. With nothing to return to, he stays, and begins to pick up the pieces of his life by fixing up the house his parents left behind.

A chance encounter with a precocious and deaf young girl introduces Hayden to Isabelle Sampi, a struggling artisan baker. While single-handedly raising her daughter, Genevieve, and trying to resurrect a bakery, Isabelle has no time for matters of the heart. Yet the presence of the handsome doctor challenges her resolve. Likewise, Hayden, protective of his own fractured heart, finds something in Isabelle that awakens dormant feelings of his own.

As their attraction grows, and the past threatens their chance at happiness, both Hayden and Isabelle will have to confront long-buried truths if they are ever to embrace a future."


Genevieve blinked, but did not respond.