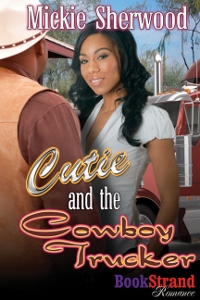 Blurb:
Widow Veronica Torres needs something desperately—invisibility. Escaping the clutches of her conniving brother-in-law and traveling incognito in the RV she traded for online sets her on a collision course with her new destiny, and a barreling fiery red 18-wheeler.

Trucker Mike Masterson steams at the close call. First, he nearly sideswipes her. Now, she ends up at the same rest stop with mechanical trouble. Maybe, she deserves to sweat it out in the June heat since she has the attention span the size of a pea. But, the child in her company deserves better. What else can Mike do besides cart them to his garage for repairs?

Will their burgeoning relationship ignite more fireworks than the upcoming Fourth of July celebration? Or will the sparks of six nights and seven days of summertime sizzle—fizzle to an end?

Excerpt:
Veronica approached the door and immediately remembered the rattletrap sounds from earlier. She decided to steal a look at the situation.
But first, she kneeled in front of her son for an eye-to-eye chat. “Sammy, Mama’s got to check the roof.” She stepped into the RV for something to hold his and Bingo’s attention for a while, and came out with a big red ball. Strapping the dog leash around his wrist, she instructed, “I want you and Bingo to stay right here and play. Can you do that for me?”
“Where are you going?”
She recognized the tremor in his voice. “I’ll never leave you alone, Sam.” A humongous substantiating hug brought a smile to his face. Veronica kissed him until his giggles chimed on the wind, signifying his acceptance of what she’d said. “Stay where I can see you. Okay?”
“Okay.”
Veronica monitored the scene, checking to see if they’d garnered any unwarranted interest, before climbing up the side ladder to the roof. Looking down on him from the top rung, she reminded Sam, “Stay put.” His acknowledgment sent her on her hands and knees along the hot metal roof, to the troublesome area.
The lid moved easily at the touch of her hand. Screws hung in their holes, giving her the idea of tightening them with her fingers. That worked only so well, not well enough to make a tight seal. Only one thing to do. She maneuvered her way back to the ladder, peered over the edge, and almost had a heart attack.
“Sam!” She screamed his name, and he looked straight at her, then to the man sitting at the picnic table. She looked at the man, too. Veronica scrambled to grab the ladder for a fast descent. A couple of erratic steps nearly cost her dearly as she slammed hard against the side of the motor home when the ladder moved.
She readjusted her grip. “Get over here, Samuel!” she demanded between spastic heaves.
If she thought things couldn’t get any worse, she had another think coming.
A metallic noise captured her attention while she was suspended midway between heaven and Earth. Her eyes widened as she pinpointed the problem. It was the fasteners at the top of the ladder. They popped loose with a scraping sound—one at a time—while she watched.
The feeling of floating washed over Veronica as she steeled herself for impact. At the same time, she thought of her baby boy below, witnessing the scene. Several seconds passed without any pain inflicted on her body, causing her eyes to open. She still clung to the ladder although in a horizontal position, staring up at the deep blue sky, hands glued in place, rear end sagging, and her sandaled toes hooked backward over the rungs.
She scoped out the distance left to tumble to the hard ground, finding a wonderful sight to behold. The bottom of the ladder had stayed anchored even as the metal above bent perpendicular to the RV. Veronica let go and thudded the two feet or so to the grass. She craned her neck as her concern returned to Sam, who, by that time, stood next to her with tears in his eyes. Bingo showed appreciation for the unrehearsed stunt by showering her with kisses.
Veronica laughed nervously.
“Okay, okay, Bingo.”
What caught the breath in her throat as she attempted to regroup were the man-size reptile-skin boots poised behind Sam and planted widely on either side of his little sandals.
“Need help?”
Veronica noticed the cocoa-brown hands clamped on Sam’s shoulders. They bore the pinkish spotted discoloration of healed burn scars. That in itself was an insignificant matter. The sight of his grip arrested any relief she felt at overcoming her close call. Struggling to free herself from her caged position, she scraped to her feet, grinding grass stains into the knees of her jeans, desperate to come to the rescue.
“Take your hands off my son!” She attacked, reaching to snatch Sam away from his clutch.
His top lip curled under the full, neatly trimmed salt-and-pepper mustache he sported.
She backed up a few steps, never wavering under his gaze shielded by mirrored shades and a soft-looking crushable Stetson. Her own disheveled reflection in his lenses broadcast alarm, but not the uncertainty swirling in the center of her abdomen. Her butterscotch complexion deepened as she stared him down. Or better yet, up and down, for even at her five-nine height, he was still head and shoulders taller.
“I’ll take that as a no,” he intoned with a rumble, turned on his booted heels, and stomped away.

Mickie Sherwood
~~Sweet, spicy romance – a heartbeat away~~
Posted by Lindsay Townsend at 16:01

Email ThisBlogThis!Share to TwitterShare to FacebookShare to Pinterest
Labels: Cutie and the Cowboy Trucker, Mickie Sherwood

Thanks, Lindsay for this opportunity to share my latest romance. Cutie and the Cowboy Trucker is a #1 Bookstrand Mainstream Bestseller. Yea!

You can read the entire first chapter.