Any of your ladies out there who’ve never had a moment’s worry about your body shape, raise your hands now.
Thought so.
Like it or not, we live in a size-conscious world and us women are judged, not always on ability alone, but on appearance, too. I’m no longer in my twenties – or my thirties or forties either, come to that – but I’m every bit as weight conscious as my younger peers. I’m five foot six and weigh 135 lbs, which is pretty ideal. I feel good about myself – up to a point. You see, a few months ago I weighed 130 lbs. Where have the extra pounds come from? Do they show? Will my clothes still look good? Will I gain more? Should I go on yet another diet?
Sound familiar? I’m old enough to know better but still get caught up in the mad ethos of sizism. So too does my mother-in-law, who’s over eighty, and kids as young as nine or ten. Is it right? Hell, no, but I don’t see things changing any time soon. 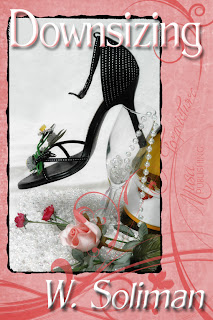 In Downsizing, my latest release from Musa Publishing, Maxine experiences all of these feelings. She’s just a teenager at the start of the book. Extremely intelligent, she feels invisible in crowded rooms, dismissed as an irrelevance because of her bulk. No one except local heartthrob Noah Fenwick can see through her unattractive exterior to the sensitive girl, with lots to offer, lurking beneath all that extraneous flesh.
Here’s how Noah tries to persuade Maxine that she shouldn’t worry about her size.
“You dance well, Max. You’re really light on your feet.”
“For a fat lump, you mean.”
“You ain’t fat, darling. Don’t put yourself down.”
“Noah, I weigh nearly thirteen stone.”
“You just need to get a bit of exercise and you’ll look great.”
“Please don’t patronize me.” Tears trickled from behind her glasses and slid down her face.
“Christ, is that what you think I’m doing?” He tugged at her hand. “Come on, let’s get out of here. I feel like a goldfish in a bowl with all these people gawking at us.”
Noah dragged her out of the tent and didn’t let go of her hand until they’d reached the bottom of the garden. He steered her towards a bench and sat down beside her.
“Here.” He delved into his pocket and produced a handkerchief. “I think it’s clean.”
“Thanks.” Sniffing, Maxine dabbed at her eyes.
“What’s wrong, Max? Wanna talk about it?”
“Nothing, other than the fact that I’m fat and ugly.”
“You ain’t ugly.” Before she could stop him Noah reached up and removed her glasses. “You’ve got gorgeous emerald eyes. Do you have to wear glasses? Can’t you get contact lenses?”
“No. I’ve got an astigmatism.”
“Never mind, you’re still gorgeous to me. You place too much stock by appearances.”
“That’s easy for you to say!” Maxine rounded on him. “You’ve got every female under the age of sixty in Colebrook lusting after you. And why do you suppose that is?”
“Yeah, and that’s why I’m qualified to say that you shouldn’t judge by appearances. You’ve got plenty going for you and don’t have to prove yourself.”
“Nobody can see beyond this.” She indicated her body with her hands, looking close to tears again.
“Well, I can. We’ve both had to survive on our wits, you and me. You’ve done it through your intelligence, but I just went to the local school…well, when there was nothing more profitable to do with my time,” he added with a grin. “So I’ve had to learn to run with what I’ve got.”
“Noah, I don’t think―”
“If it weren’t for you I’d never have discovered the joys of reading.”
“Yes you would. You were obviously drawn towards books or you’d never have come into the library that day.”
He recalled the day in question, a little over a year ago, when he’d strolled into the library on a whim, wearing mud-splattered work clothes that elicited disapproving tuts from its staid occupants. Maxine, having just started her holiday job there, sat behind the counter completely engrossed in a book. He’d asked her what she was reading but she was too tongue-tied to answer him straight away. Noah couldn’t understand why. He was the one out of place, and if anyone felt awkward it ought to have been him.
He’d known who Maxine was, but reckoned she was out of his league intellectually and would never want to know him. To his astonishment, she found her voice and recommended books that he might enjoy. Her recommendations were spot on and he went back the following week to thank her, and to talk about what he’d read. It became a habit and he often waited until last thing so they could have coffee together when she got off work.
“Perhaps,” he said. “But I was too busy making money and had no time to waste reading. Until you opened my eyes and I realized what I was missing.”
Maxine, who he knew always found it difficult to deal with compliments, changed the subject. “How’s your father?” she asked.
“Same as ever.” He drifted into a moody silence.
“Sorry if I’ve said something I shouldn’t have.”
“You haven’t, but as usual you’ve turned the subject away from yourself.”
“No one’s interested in me.”
“I am.”
Noah cupped her face in his hand and his thumb gently traced the outline of her plump jaw. He dropped his head and brushed his lips against hers, parodying the seductive dance they’d just shared in the tent. Maxine gasped, but when her arms slid round his neck and her eyes fluttered closed, it became clear that she wasn’t objecting. That impression was confirmed when, with a deep sigh, she buried her fingers in his hair. Noah’s lips instinctively hardened against hers, forcing them apart as his tongue slid into her mouth.
“Why did you do that?” she asked breathlessly when he broke the kiss.
“You looked like you needed reassurance.”
“Don’t!” She jerked away from him and groped for her glasses. “Just don’t! You don’t need to stoke your already over-inflated ego by playing games with me.”
In spite of his reassurances, he lets her down. Which is when Maxine learns one very hard lesson in life
Fat girls aren’t supposed to have fun.
Maxine doesn’t see Noah again for another twelve years, but can never get him out of her heart. To find out what happens when they do meet again, look out for Downsizing from W. Soliman at Musa Publishing. Available November 4th.
Go to my website at http://www.wsoliman.com where you can read the entire first chapter.
And to all you ladies who worry about your body shape, I hope Maxine’s story gives you heart.
Wendy
Posted by Wendy Soliman at 13:38

Wendy, I have to read your book now. It's so much my own life. I wrote about it in my book too. Aa a woman who used to weigh over 370 pounds, I know first hand the battle with self esteem and body issues. Now that I am nearly 45 years old, I think I am figuring things out a bit thanks to the love and support of my Muse.