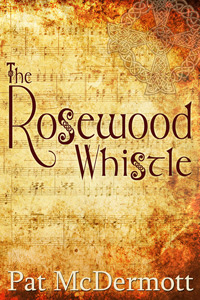 On her own at the end of a long and difficult marriage, Gemma Pentrandolfo still hears the critical voice of her husband taunting her from his grave. To foster her independence, she schedules a summer vacation in County Mayo intending to write her first book, and she’s counting on Ireland for inspiration. An idea presents itself when she tours Achill Island with a silver-tongued tour guide whose good looks prompt her to write more than her high-minded novel: she transcribes her years of longing in a steamy fantasy no one is meant to see.

Years have passed since an accident claimed the self-absorbed wife who scorned Ben Connigan and his music. Since then, the former tin whistle ace has avoided marriage, though he never lacked for female companionship before he traded his high-tech career for the slow-paced life of a hometown tour guide. Ben has accepted the end of his run of discreet affairs, until he takes Gemma touring. Her passion for Ireland impresses him. Her love of Irish music soon compels him to dust off his whistles. Knowing she’ll leave at the end of the summer, he sees no harm in keeping her company—until he dares to dream of spending the rest of his life with her.

But he knows it can’t be, not while the ghosts of their partners still haunt them. Not unless the music and myths of Ireland can help them find their way…

(Ben is driving Gemma to Achill Island for a tour. He’s allayed her concerns that this might be a date by saying that between her forty-eight years and his fifty-two, they have a hundred years of living between them, experiences they might share now and then. In this scene, they’ve stopped at the beach in Mulranny so Gemma can photograph Clew Bay.)

He stayed near the car while she shot her pictures, scampering over rocks and grass still damp from the recent shower. But for an older couple rambling along the tidemark, she had the beach to herself.

Cottony fair weather clouds tumbled in from the sea. Knowing how fast they could blacken, he monitored their approach as he breathed in the salt air and watched little waves wash over the sand. He never grew tired of viewing the islands that peppered Clew Bay.

He doubted he’d ever grow tired of watching Gemma either. The thought surprised him. Hadn’t he put her down as a summer fling?

She returned to the car, the wind whipping her hair over her reddened cheeks. He thought he’d never seen such a beautiful smile. And wasn’t she the thoughtful girl, giving him an excuse to visit some of his favorite scenery?

“This really is gorgeous,” she said. “So salty and clean. I love how the clouds roll like smoke from a wildfire, and I could listen to those waves forever.”
“They say it takes three days for a wave to reach Ireland from Nova Scotia. Look.” He pointed to the sky, where a shimmering rainbow arced over the bay.

She raised her camera, but the rainbow had already faded. “I’m adding that to my list.”

“My list of why I like it here. The music. Bright summer nights. Good tea. Fish and chips. Castles. And most definitely, rainbows.” She smiled slyly at him. “I’m sure I’ll have more to add by the end of the summer.”

Was she inviting him to add an item or two to her list? Considering the possibilities, he opened the passenger door for her. She paused to wipe the soles of her shoes on the grass.

A thoughtful girl indeed. As he reclaimed the driver’s seat, he started his own list about Gemma Keenan. “Nothing for the ‘Why I hate it here’ side of the list?”

She wriggled out of her jacket and combed her fingers through her hair. “Not yet. Even the weather’s been great.”

He tossed their jackets over the seat. His hand grazed her arm.

Her gaze locked on his. “A hundred years, Ben. That’s a long time.”

After a prudent but powerful pause, he bent his head and kissed her. No hands, no arms, no more than two pairs of lips brushing once.

The third time, she kissed him back before breathlessly turning her head away. The color the wind had put in her cheeks had deepened.

Ben didn’t trust himself to speak. He felt spring-loaded, a little drunk, a lot in one hell of a heat. How had a few superficial kisses set his heart beating double time?

Boston, Massachusetts native Pat McDermott writes romantic action/adventure stories set in an Ireland that might have been. Glancing Through the Glimmer and its sequel, Autumn Glimmer, are young adult paranormal adventures featuring Ireland’s mischievous fairies. Both books are “prequels” to her popular Band of Roses Trilogy: A Band of Roses, Fiery Roses, and Salty Roses. The Rosewood Whistle is her first contemporary romance.

Pat is a member of the New Hampshire Writers’ Project, Romance Writers of America, and Celtic Hearts Romance Writers. Her favorite non-writing activities include cooking, hiking, reading, and traveling, especially to Ireland. She lives and writes in New Hampshire, USA.

Posted by Lindsay Townsend at 11:20

Good morning, Lindsay. I'm delighted to be visiting the Contemporary Fiction Network blog today. Thanks so much for having me and The Rosewood Whistle!

Love the sound of this, Pat, and will have to add it to the TBR list! Really enjoyed your YA fiction and suspect this will be equally good.

Rosemary, I know about those TBR lists. They get higher/longer all the time :-) I think the blend of romance and humor in this story will entertain adult readers well. I hope so! Thanks so much for stopping by.

I'm intrigued by your YA fairy books Pat.

This looks wonderful. I can't wait to read it.

As an insider, I can reliably recommend this novel to all who seek a nice blend of Autumn romance, history, folklore and breathtaking views of Ireland.

Pat, this sounds like a wonderful story! Can't wait to read it!

@Rose, watch out for those fairies. They're trouble for sure!
@Edie, if you do read it, I hope you enjoy it as much as I enjoyed writing it.
@Dave, thanks for the kind words. Always nice to have one of one's writing/critique partners in the cheering section!
@Cynthia, I'm tickled that you found time to visit on your own Release Day. Congrats again!
@Sincere thanks to you all for stopping by!

Looking forward to reading this one, Pat. On the top of my TBR list for my next read. :)

Can't wait to get to this! Congratulatons, Pat!

@Dawn, not sure how it got there so fast, but I'm glad it did :-)
@Alexa, I appreciate your good wiahes.
@Thanks so much to you both for dropping in to say hello!

Hi Pat, I decided not to read the excerpt because I got the book yesterday and cannot wait to read it. The cover alone should tempt buyers. I wish you a lot of luck with your sales.

@Alexa, that should be "good wishes." Sorry!

This will be a charming story for lovers of contemporary Ireland. Good luck, Pat!

Thank you, Miriam. I enjoyed "visiting" Westport and Achill Island over and over as I wrote it. Hopefully readers will enjoy their visits too!

Glad to hear it, Gerri. I hope you find it an entertaining read. Thanks for stopping by!

Definitely putting this on my TBR list, Pat. Your excerpt was a lovely reminder of Clew Bay!

Paula, I'm assuming you've been there. Isn't it lovely? Unchanged for centuries. I like to picture it with Pirate Queen Grace O'Malley leading her pirate fleet through the islands. Thanks for visiting!