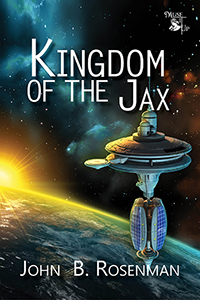 Accompanied by Yaneta, his beautiful alien bride, Turtan travels across the stars to Cross Imperial Station.  The Jax, Overseers of the universe, have given him an amazing navigational device which can enable the Cross to quickly defeat their seemingly invincible enemy, the Cen, and end their five-thousand-year-old war.

But will the Emperor welcome him to the station or order the execution of both him and his wife?  Turtan is, after all, endlessly resourceful and may learn the emperors’ terrible secret and act of betrayal concealed these past five hundred years.  Even if spared, Yaneta is still a member of the enemy and may be killed instantly.

To succeed in his mission, Turtan faces an almost impossible task, one requiring not only luck but the full range of all the skills he has acquired in four thousand years as an elite agent.

It is his greatest challenge ever.

“Kit, what’s the quickest way out?” he asked.

She pointed to the right. “This way,” she said as they left the tunnel. She turned to the settlers behind them. “Stay alert,” she called. “Watch the children.”

No casualties so far. Turtan held his laser ready, wondering if he’d need it. So far the Radiants had been fifty times more efficient than when he’d fought Assan. They shot out, killed the enemy, and returned to him. An endless, inexhaustible supply of ammunition.

Caves and tunnels, crannies and dead ends, and hidden nooks built to ambush—deadly confusion was what this place was made of. It was an intricate warren of mind-warping turns and corridors which seemed to go somewhere and often didn’t. He sensed the flights of stairs he’d entered this puzzle place by were above and to his left, but despite the indispensable compass he carried in his head, he wasn’t sure he could find them readily. Maybe he couldn’t find them at all.

They climbed toward the surface, sometimes gradually, sometimes mounting steep grades. As they moved from room to cave and slipped down tunnels between them, Turtan acquired increased respect for the pioneers who’d anticipated the Cen’s arrival and spent nearly three quarters of a century digging this maze in preparation. It must have been hard. It must have been a tedious, hellish, soul-draining challenge. He hated to think of the number of times their determination must have flagged, and they’d wanted to lie down and quit. Yet against all odds, they’d persevered, and their prolonged survival since had been made possible in the crucible of this grand and courageous project.

Had there been a master architect or designer? Someone who sat down in advance and drew a blueprint of this labyrinth? Somehow, he hardly thought so. At any rate, such a visionary could hardly have anticipated the divinely beautiful cave waiting at the bottom in payment for their efforts.

There were no beautiful caves here though. Kit led them to a dark cramped hole where they had to walk hunched over and to a slightly larger one smelling like an armpit. Something in the dim air made his eyes sting. They passed through it into a narrow tunnel and turned left onto a slight incline.

Several Cen soldiers leaped out from hiding and opened fire. As settlers fell around him, Turtan returned their fire with his laser. His real attack, though, was through his eyes, where the Radiants zeroed in and launched forth with deadly effect. Half a dozen Cen stiffened abruptly and did a dance of agonized delight, fighting to control their weapons as they aimed them away from their enemy and toward each other. Rapturous screams rent the air as they died one by one.

When the enemy lay still, Turtan glanced around. They’d lost as many men as the Cen. Sky and the kids, thank God, were still alive.
“You love her more than me, don’t you?” Kit asked.

You picked a swell time to bring this subject up, he thought. Look, you’re a sweet girl, but I just met you. Besides, I love Yani. I will always love Yani. He decided not to answer.

“It’s all right,” she said. Ignoring the dead bodies, she raised her eyes toward the world above. “It’s her I have to worry about.”

As it turned out, they all had a much bigger concern. Turtan heard an explosive rustle of movement in caves far below and behind him.

Kit cupped her mouth with both hands. “Bats!” she hissed to nearby settlers.

The communal code word was passed down the line. Tense faces swung to each other. Turtan saw Albert hold Sky closer.

A moment later, he heard bat wings beat the air and furiously take flight, accompanied by high-pitched squeaks. Hundreds, thousands of bats, probably flying around and around before escaping through an air vent into the sky. Seconds later, the earth began to rumble deep in its bowels as if straining to give birth. It continued for a minute then died out. No reprieve, though! Soon the walls of the mine creaked and shivered, vibrating underfoot. Turtan glanced at Kit whose lips formed their common fear.


Now the whole mine shook and trembled. Rock dust sifted down, glinting in the air and scratching his eyes. He had a vision of boulders crashing down on their heads, crushing them to pieces, of God’s Jewel Box collapsing in a Satanic shambles.


A rock half as large as his head bounced off the side of his boot. He bit back the pain, hearing other fragments fall. One settler gasped as a rock struck his chest. He was lucky. A few meters away, a black shard larger than a man crashed to the floor.
Turtan waited for the quaking to subside. It didn’t. Several settlers lost their footing and fell. Like the born mine dwellers they were, not a single settler looked afraid.
A stone spear split from the wall to his left and shot directly at his eyes. He ducked, barely saving his sight.


“Let’s get away from here!” he shouted. With Kit’s help, he led the settlers back to an open tunnel, hoping it would be safer.

“Has this ever happened before?” he asked Kit, aware Cen soldiers might be nearby.

“Six months after I was born. Nine of us were killed, including my grandpa. Some enemy, too.” She panted. “God’s Jewel Box wasn’t even touched. It was a miracle.”

What a pity. Maybe this time, the quake will smack everybody, human and Cen alike, and end this stupid subterranean war. He imagined himself lying dead with Kit in his arms, his quest ended forever.

John, a retired English professor, has published 300 stories in Writers on the Wrong Side of the Road, Weird Tales, Whitley Strieber's Aliens, Galaxy, The Age of Wonders, etc. He’s also published twenty books, including SF novels such as Beyond Those Distant Stars and Speaker of the Shakk (Mundania Press), and Alien Dreams and A Senseless Act of Beauty (Crossroad Press).

Two of John’s major themes are the endless mind-stretching wonders of the universe and the limitless possibilities of transformation—sexual, cosmic, and otherwise.

Thank you for having me as a guest, Lindsay. The presentation looks terrific.