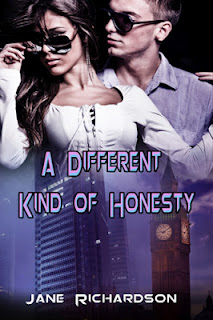 Always the one who ends relationships before they’ve barely begun, it’s way out of character for Maggie Lawless to take a risk with a man she hardly knows…the man she meets in a seedy New York City diner has a truth about him, a sincerity like no one she’s ever met before. Tony Valentino is an FBI agent fresh from a long-term undercover operation that’s left his life in tatters. His marriage over, separated from his children and with nowhere to call home, he’s frustrated and angry. All that keeps him going is the sweet memory of a brief encounter with a beautiful woman, though it wakes him from crazy dreams that leave his mouth dry and his sheets soaked with sweat. When he meets her again, it’s obvious the fire that burned so briefly between them never really went out...but as their affair rekindles, both Tony and Maggie find the very people they thought they could trust are the first to turn against them.

“I don't want to lose you, Maggie. Really I don't!”
Detective Sergeant Danny Chang shuffled along the corridor on his knees, his hands clasped over his heart in a frenzy of unbridled passion.
“Please! You want me to beg? Look at me—I’m begging.”
Maggie sighed. “Aw, come on, Danny. You know how much I love you. No matter what happens, we'll still be friends.”
“Ha! You say that now, but when you've finished with me you'll crumple me up and toss me aside like a used tissue. You're just like all the others!” Danny threw himself face down on the floor and sobbed, his shoulders heaving in distress. Maggie stepped over his prostrate form and leaned against the swing doors at the end of the corridor.
“You're a nut, Chang.” She shoved a door open with her shoulder and walked through backwards, laughing.
Danny picked himself up and brushed the dust from his already grubby jeans. Pushing the door open further, he stood aside to let a young female constable pass, eyeing her curvaceous bottom appreciatively as she scuttled by in too-tight uniform trousers. Maggie folded her arms and watched his undisguised lust with an amused smile.
“You never miss a shot, do you?”
“Life's too short,” he answered, flicking his over-long fringe out of his eyes. His sleek, glossy hair gleamed with the black-blue sheen of a crow's back. He watched the WPC’s retreating form as it disappeared around a corner. “So anyway—what's all this crap about you leaving?”
Maggie shrugged and turned away. “I never said I was actually going.” She loosened the belt of her damp raincoat and shook her hair out of the collar as she walked down the corridor. “All I said was I feel like a change. That's all. You know, try something different.”
Danny fell into step with her, slipping off his battered leather pilot jacket to reveal a T-shirt that might have once been white, but had long ago washed out to rain-cloud grey. A ladder of rips ran down the left leg of his jeans. One of the tears gaped open, revealing a knee with every step he took.
“Don't do it, Maggie,” he pleaded. “It won't be the same without you. I'll really miss you if you go.”
“Danny, you haven't seen me in six months.”
“Ah, but I thought about you every day and most nights. Dreaming of running my fingers through your soft auburn hair, losing myself in those beautiful baby blues. What do you think kept me going, up there in Miserable Manchester?”
“You really are a loony, you know. What are you now, thirty-two, thirty-three? You're the youngest dirty old man I know.”
Maggie was only pretending to be serious. She and Danny Chang had been friends since day one at Police College. They'd laughed, cried, and got roaring drunk with each
other, more often than not all on the same night. But never anything more, not even so much as a drunken snog, never mind a chaste kiss. If asked, Danny would have said their friendship was too valuable to spoil. Maggie would have said she’d trust him about as far as she could throw him with the wind behind her. Either way, they were best friends who told each other everything.
Most things, anyway.
Their pace slowed as they turned the corner, where two rows of doors faced each other across the corridor. A particularly evil variety of one hundred percent nylon carpeting covered the floor. After walking across it, you had to be certain to neutralize yourself on a wooden surface before touching another living soul for fear of zapping them half-dead with static shock.
Maggie rapped her knuckles on a mock-teak door with a black plastic nameplate announcing in white letters the lair of Detective Inspector Rachel Arden.
“I wonder what she wants?” Maggie whispered. “She only just caught me, too. I was trying to sneak off early. I haven't had a free weekend in ages.”
“Yeah,” Danny agreed. “And it's Poet's Day.”
“Poet’s Day?”
“Yeah, Poet’s Day. You know. Piss Off Early, Tomorrow's Saturday.”

Very nice blog. thanks for sharing such a great information. Pilot Jackets

Thanks for posting this, Lindsay. And thank you, dear spammer, for bothering! ;-))

Thanks for a chance to check out A different Kind of Honesty. It looks very interesting, another book for my wish list.
MaryC.

You're welcome, Mary! Thanks so much for coming over. :)